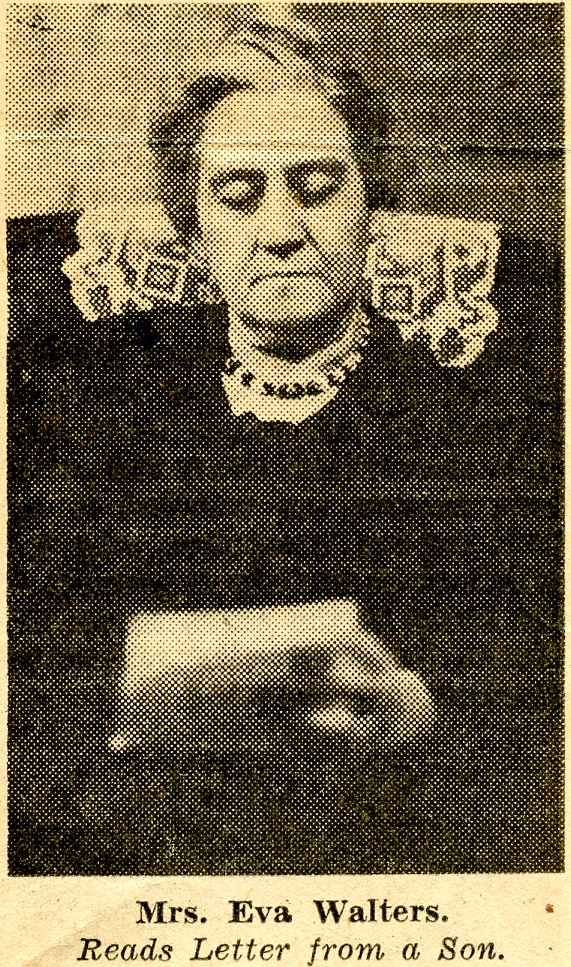 EDGEWOOD, IA.—The war soon will roll closer to the home of Mrs. Eva Walters, 59, Edgewood widow, when the sixth of her nine sons will enter Uncle Sam’s armed services. The three others registered in the new draft Feb. 16.

“But,” says Mrs. Walters, “I would not have it otherwise. Ev­ery one of the boys wanted to fight for his country and I am thankful that all have the health and patriotism to see this thing through.”

Mrs. Walters also is the moth­er of three daughters. Her 12 children were born in Mallory township, near Edgewood. “It was five years ago that all my children last were together,” the mother said, “but I hope they will be reunited in less time than that.”

The sixth son who plans to be in the armed service soon is Mrs. Walters’ oldest, Gordon Walters, 32, who is unmarried. Gordon has passed his final physical ex­amination for the army but plans to enlist before he is called.

A graduate of Dubuque univer­sity, Gordon was employed in the war department in Washington, D. C, three years and since then has been employed in Des Moines and Cedar Rapids, Ia.

Lowell, 23, was the first to en­list in June, 1940, following his graduation from Edgewood High school. “I was not very enthused when my first boy decided to leave home,” the mother continued. “He was very much in earnest, how­ever, and when I saw how happy he was I did not want to inter­fere.”   Lowell now is a corporal.

Clifford, 30, a graduate of Bayless Business college of Dubuque, was the next, enlisting in the air corps as a mechanic at Long Beach, Cal.

Garland, 28, also a graduate of Dubuque university, joined the national guard. He later was released under the 28-year-old provision, but was recalled in January.

Raymond, 26, also a graduate of Elkport High school, worked in a munitions factory at Joplin, Mo., prior to his induction into the army Jan. 1.

Donald, 21, who has a twin sis­ter, was graduated from Edgewood High school in 1940 and has enlisted as an air corps mechanic with his older brother, Clifford.

Asked if writing letters to her sons did not keep her busy, Mrs. Walters replied: “Well, I usually do receive five or six letters each week from the boys, and generally write six or eight in return. In the meantime, my papers and radio keep me pretty well in­formed on the progress of the conflict. I try not to worry, too much, because I know that all things turn out for the best.”